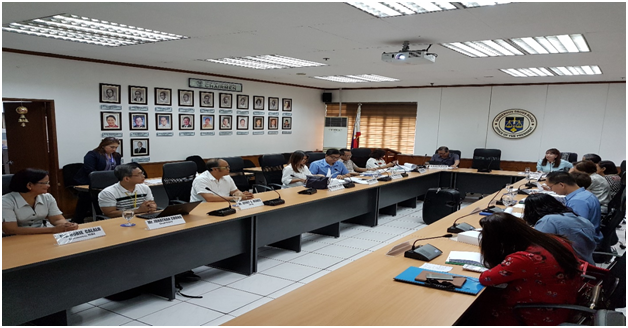 The DDB – TWG invited SPIK to the meeting which included in the agenda, Gamma-Butyro Lactone (GBL) where it is undergoing final discussion for regulation. To refresh our memory, SPIK at the request of Dupont, submitted a Position Paper to the DDB on the GBL on September 26, 2016. For this reason, SPIK was invited by the DDB to a public hearing with the TWG on February 6, 2017.

Jonathan Chong of Dupont who made the request to SPIK for the Position Paper, also attended the public hearing who appealed to the DDB-TWG that a threshold concentration of the substance that will not require permits and licenses be considered. In turn, the DDB-TWG asked for information or any technical study showing that at certain concentrations, GBL can be considered safe when ingested by persons. Incidentally, Dupontcancelled its membership from SPIK on January 25,2017. Even with this turn of events, SPIK still showed its support for a former member.

During the DDB-TWG meeting, SPIK formally expressed with finality that the association does not interpose any objection to the inclusion of GBL in the List of Dangerous Drugs. Except for Dupont which has cancelled its SPIK membership, we have not received any issue on the GBL from any of our members. Because of the nature of the substance, which has industrial applications and traded in substantial quantities throughout the world, it is by itself a psychotropic drug and not an ingredient, precursor or essential chemical component in the manufacture of dangerous drugs thus persons apprehended possessing the substance without the required permits and licenses can be prosecuted by virtue of R.A. 9165. Likewise, Dupont also expressed the same position as SPIK.

The PDEA-DDB thanked SPIK for its final position on the GBL.

You can find out more about which cookies we are using or switch them off in settings.

This website uses cookies so that we can provide you with the best user experience possible. Cookie information is stored in your browser and performs functions such as recognising you when you return to our website and helping our team to understand which sections of the website you find most interesting and useful.

Strictly Necessary Cookie should be enabled at all times so that we can save your preferences for cookie settings.

If you disable this cookie, we will not be able to save your preferences. This means that every time you visit this website you will need to enable or disable cookies again.